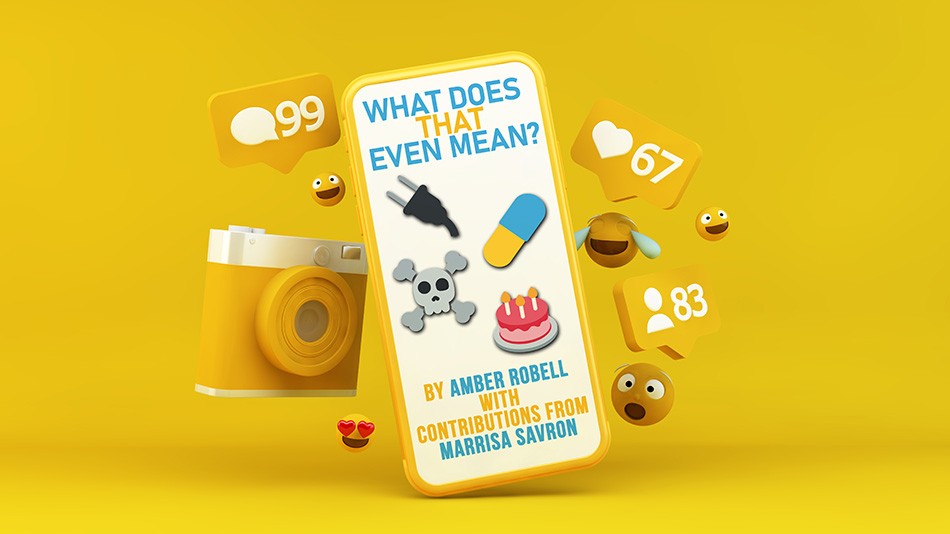 What does that even mean? By Amber Robell with contributions from Marrisa Savron

Growing up with smartphones and tablets is something that makes current teens unique compared to the previous generations. With the rapid development of social media platforms and numerous forms of direct messaging, teens are constantly communicating with one another and developing their social media presence. Emojis, slang, and acronyms have all been intertwined with how we speak to each other and is done so seamlessly that we read and interpret as normal speech. For those who did not grow up using these emojis, acronyms, and other text lingo, they can seem like a foreign language difficult to translate. Being able to translate these is the key to understanding direct messages and social media messages, so here is my introduction to breaking down some text language that parents of teenagers should look out for to ensure their teens are being safe online.

DRUG USE
One unique aspect of using emojis is they can hold a variety of meanings. It is crucial to understand the context in which the emoji is being used. Just because an emoji mentioned here is in a teen’s messages does not mean they are participating in risky behavior that I mention. For example, the leaves emoji 🍃 can mean a teen is using marijuana. At the same time, teens may use this emoji in an Instagram caption when accompanied by an outdoorsy photograph or video. When I see my peers use the leaves emoji to represent marijuana, I look for other clues such as the wind emoji 💨 to indicate smoking, the word “zooted” (intoxicated), or any other reference to marijuana or getting high. Some other drugs that I’ve seen referenced using emojis are cocaine ❄️ and heroin 💊. People can use the pill emoji to represent drugs in general. Again, I observe the rest of the message, who it was sent to, who could view it, location, and other context clues to determine if my friends are talking about drugs. In my personal experience, I notice that 🍃 is used more to talk about marijuana than ❄️ or 💊 which are used to talk about other drugs as mentioned above. One last thing I commonly see is 🔌, which is read as “plug”. A plug is someone who can hook you up with anything from food to school supplies. When 🔌, is used alongside 🍃, ❄️, or 💊, it usually means a drug dealer. These examples from my own experiences do not encompass all the possible ways teens talk about drugs online, but they are the most common examples I find.

SEXUAL ACTIVITY
When I scroll through Tik Tok in my free time, I see countless emojis used to describe genitalia and sexual activity. On social media, using those words (especially slang versions) is often a violation of community guidelines and will cause a post to be taken down. Many foods that are a phallic shape are used to represent male genitalia, such as the eggplant 🍆, burrito 🌯, and hotdog 🌭. On the other hand, a variety of emojis is used to describe female genitalia, especially the cat 🐱 and the taco 🌮. Female breasts are commonly represented by cherries 🍒, and a butt is shown using a peach 🍑 and a cake 🎂. All these emojis representing body parts can be used in sexting (sex texting) and talking about nudity. Some sexual activities are described using a combination of emojis. For example, a person using ✊🏻🍆 is talking about masturbation and a person using 👉🏻👌🏻 is referring to penetrative sex. I also see teens use the tongue 👅 to indicate oral sex, especially alongside 🐱 or 🌮. The drips emoji 💦 and the peanut emoji 🥜 mean an orgasm. Be careful though! The drips can also mean someone has “drip”, which is a compliment that means they are cool or have cool clothes/accessories. In social media posts that include nudity or sexual activity, I have seen the hashtag #NSFW, which means “not safe for work.” A large portion of posts using this hashtag should be for 18+ audiences because they feature more blatantly sexual content and nudity. Lastly, with a rise in dating apps, there is worry about teens unsafely meeting up with strangers and placing themselves in dangerous situations. One acronym I’ve seen in my peers’ text is LMIRL, which stands for “let’s meet in real life.” These emojis and acronyms mentioned are important in identifying any sexual harassment, predatory conduct, abuse, or bullying online.

SUICIDE/SELF-HARM
Many content creators or teens discuss their lived experiences with others via social media to raise mental health awareness. At the same time, the word “suicide” can cause a social media platform to remove someone’s post, which has led to the innovation of words and phrases to replace “suicide.” “Sewer-side” sounds like “suicide” and is a common substitution. Others on social media choose to use the gentler phrase “unalive myself”. The acronym KMS stands for “kill myself.” As a teen trained in mental health first aid, I take any mention of suicide seriously, so I recommend everyone know what these mean. Conversely, people use the acronym KYS (“kill yourself”) in cyberbullying and hate comments. These should be taken just as seriously.

STAYING TUNED IN AND CURRENT
I hope my introduction to these different categories and some of their emojis, slang, and acronyms provides a starting place for parents to better understand what is being communicated in today’s social media and other communication platforms. Please remember that context is extremely important and that this is an “ever-evolving language.” What something meant a month ago may no longer hold the same meaning. ❦

About Amber Robell and Marissa Savron 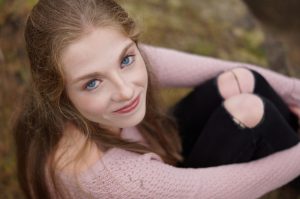 Amber Robell (pictured) is a current student at Oregon State University studying BioHealth Sciences with the pre-med option. She participates in multiple activities on campus including research. In her free time, she enjoys attending group fitness classes and going to coffee shops with her friends. In middle school, she learned to knit and crochet. Since then, she has enjoyed making blankets and hats for her family and friends. Recently she got a Circuit vinyl cutter and has been making custom water bottles and tumblers as well. Photo by Molly Piszczek Photography – Instagram handle: @piszportraits