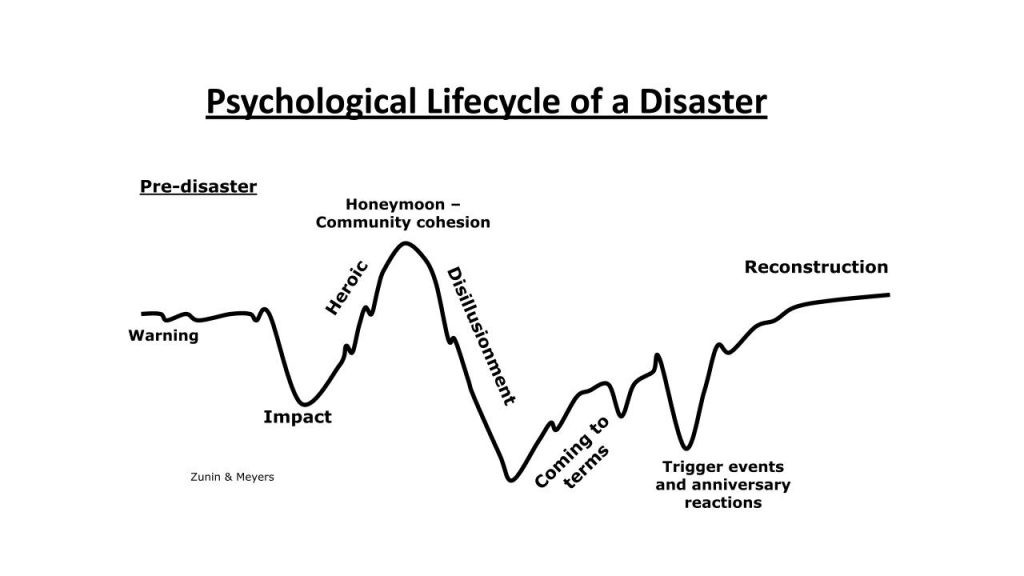 This discerning opening line of the 9/11 Commission Report portrays an undeniable reality about life in the United States over the past 20 years. Since the loss of nearly 3,000 lives in the deadliest terrorist attack ever conducted anywhere, our country, and indeed the world, has experienced significant changes that can be linked directly to the attack. The transformations we have experienced since then are neither surprising nor complete.

In 1984, Zunin and Meyers, two academic researchers, outlined what they considered the psychological life-cycle of a disaster. Their model described the psychological trajectory communities experience over the years following the impact of a disaster. While they were primarily focused on addressing the impact of natural disasters such as hurricanes and earthquakes, in my global crisis response work, I have found their model to be applicable to a wide variety of community tragedies, including the September 11th attacks.

The Psychological Lifecycle of Disaster model allows us to visualize community recovery over the course of time. While the original model projected the recovery process over three years, it has been my experience that, depending on a wide range of recovery factors, the model can be applicable over decades. Indeed, for those families who suffered the most devastating losses, the impacts and recovery process could be generational in nature.

As we can see in the model (figure 1), the initial ‘impact’ of a disaster or crisis brings about a significant physical and psychological blow to those at the center of the tragedy. This stage is quickly followed by a rescue (‘heroic’) period in which significant moral and physical support flows into the community from neighbors, strangers, and professional rescue or support organizations. Once the initial threat has been quelled, and a brief ‘community cohesion/honeymoon period’ sigh of relief ensues, the many volunteers and rescuers return to their home communities, their own lives, and in many cases to support others during the next, still to come, tragedy. This is followed by a period of ‘disillusionment’ and despair for those who remain in the impact zone and try to establish a new normal for their lives. Eventually, communities rise to begin the often erratic and frustrating long road back to their new lives via the rebuilding and ‘reconstruction’ period, which is both physical and psychological in nature. In relation to 9/11, this reconstruction phase is still underway, 20 years later, and may be for years to come. But what is particularly significant about the reconstruction phase is that it typically incorporates new technologies, new information, new community bonds, and new preparedness strategies, all direct outgrowths of the tragedy.

Throughout the lifecycle, on an individual level, researchers in the field of positive psychology have found that those who responded to the attacks with positive coping strategies and anger were more inclined to show signs of posttraumatic growth than posttraumatic stress. On the other hand, people who responded with negative coping strategies and feelings of depression were more likely to experience higher stress levels. Positive coping can often be characterized as taking direct actions to foster recovery and rebuilding; identifying aspects of the restoration process that one can personally and directly influence, no matter how small.

Identifying the many positive and negative changes in our individual and collective lives resulting from 9/11 is virtually impossible. What’s important to remember is that recovery from any traumatic incident is a developmental process. That is, it occurs over time in a non-linear fashion. Focusing on a single point in time, glimpsed from across the entire recovery timeline, reflects only that specific moment. For these types of life-altering events, we must take the long view to truly understand the positive and negative impacts of such enormous disruptions to our lives. And as such, at this 20-year post-9/11 vantage point, we should celebrate the progress and positive changes that have resulted, and equally profound, acknowledge the significant losses and pain we’ve endured. Doing so will help bond us as a nation and reinforce our resilience for the future challenges we will face.

This long-term developmental view allows us to both ‘NEVER FORGET’ as many have said, and to ‘NEVER STOP LEARNING’ about what we are capable of when we work together in community. ◙ 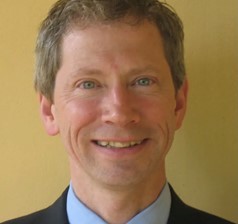 Dr. Kevin Becker is a licensed clinical psychologist specializing in trauma and crisis for nearly 30 years. He is currently Senior Partner at Organizational Resilience International, a global crisis consulting firm. He served for ten years as Director of the Trauma Center in Boston, the nation’s first comprehensive research, treatment, and training facility for psychological trauma. He has worked extensively with governments, organizations, and communities following major disasters such as 9/11; the 2004 Tsunami; Hurricane Katrina, the Kashmir earthquake in 2005, the Amish school shooting, the Sandy Hook/Newtown shootings, the Marshall County High School shootings, and the Boston Marathon bombings. He has authored globally-distributed manuals on caring for children and adults following disaster and tragedy. He is a frequent speaker and trainer on psychological trauma and crisis issues. His preferred methods of self-care are running and glassblowing.

He can be reached at kevin@oriconsulting.com