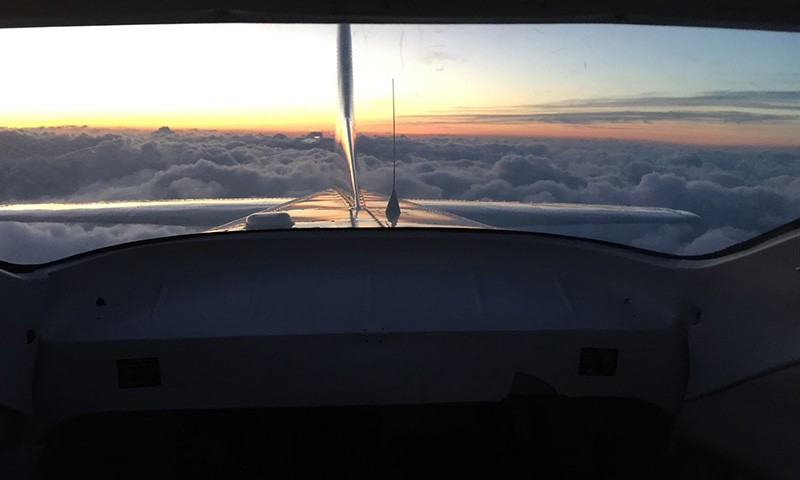 When they were 15 and 13 years old, I sat my two oldest children down to tell them about the time that the three of us almost died. They didn’t know that several years before, when flying us in a small plane, we had been caught in a deadly situation and almost did not make it.
To understand this story, you first need to know some basic principles of flight. When pilots get their first license it is a license to fly in clear skies. It takes an increased level of skill and training to fly in other weather conditions when the pilot doesn’t have visibility and has to fly by instruments alone. In the flight community, these two types of flight are called Visual Flight Rules (VFR) and Instrument Flight Rules (IFR).

The most dangerous situation for a pilot is when VFR flight turns into Instrument Meteorological Conditions (IMC), which means the weather was clear but then the plane flies into bad weather conditions. When the plane flies into clouds, the pilot loses visual reference to the ground and with the turbulence can’t tell if the plane is turning or spinning. More than 80% of VFR flights into IMC results in a fatal accident.
On a small aircraft, like the plane I was flying, the most dangerous weather condition that can happen is ice. If your plane gets caught in the clouds and it is cold, the moisture in the clouds adheres to the plane and the plane turns into a flying popsicle. If too much ice accumulates, the plane will fall out of the air and crash. So, as a pilot if you encounter an ice situation, you have to get out of it immediately.

At the time, I was a fresh pilot and I was flying an airplane in for routine maintenance. It was a plane I shared with other pilots, and I had volunteered to fly it from Virginia to the plane shop in Kentucky. I took two of my children along for a fun flight with Dad. I thought it would be an uneventful trip to Kentucky. I didn’t know about reading weather conditions.
As we were flying over West Virginia, I started to see clouds ahead. At the time, I thought I could just stay underneath them. I continued on. Now they warn you as a pilot about the dangerous phenomenon of “get-there-itis” which makes you take dangerous risks because you are set on getting to your destination. Well, I fell into it. I had people counting on me to get the airplane fixed and I didn’t want to let them down.
The tops of the clouds started skimming the top of the airplane as we were over the mountains of West Virginia. I couldn’t see far enough ahead to tell if higher mountains were coming and I was worried about crashing into the top of a mountain so I took the plane up to higher altitude. I thought that I could just punch through the clouds and get on top of them quickly. As I came up into the clouds though it got colder. I started picking up ice. The worst issue that could happen.
I tried to problem-solve quickly. I realized I needed to go back down to where it was warmer to get out of the ice so I started descending again. I thought once I got down and the cloud layer thinned out then I would be able to see the ground again and get a plan. As I started descending though, I saw the tops of trees and immediately had to go back up into the clouds.
In that moment, when I was trapped in a deadly situation, an unexpected wave of euphoria came over me. I remember it like it was yesterday. It was the feeling some people describe that they experience right before death. My body was telling me to just let go and let the plane crash.
I had to fight with every ounce of mental fortitude that I had to overcome that feeling. As I fought, I went through everything I could think of to do in my head and remembered my flight instructor telling me if I ever got into this situation to put the engine to full power and climb. Climb until you get through the clouds. So I put the plane in full power and climbed and climbed until finally the plane broke out of the clouds. I had to continually fight myself at every moment from giving up until we finally broke through to clear sky.

When the plane touched down on the runway in Kentucky, I could hear the ice falling off it. As we climbed out of the plane, I held it together in front of my kids, and they never knew anything was wrong. When we got to the hotel where we were spending the night, I went into the bathroom and just collapsed to the floor as the reality that we had all almost died fully hit me. According to statistics, none of us should be alive.
The reason I then told my children this full story years later wasn’t because I wanted to shock them that they had almost died in a plane crash but because I wanted them to understand the power of perseverance. That you NEVER give up in the face of difficulty. If I had given up and listened to my body telling me to just relax and let the plane crash, then we wouldn’t be here.
We all have life stories, maybe not as dramatic as mine, of times we persevered through a hard situation. As parents, we need to leverage these stories to teach our children resiliency. Everything is survivable. We would do our children a huge disservice to let them have a false expectation that life is always easy and to not prepare them for how to handle challenging times when they come. When life gets hard, we don’t want them to give in to hopelessness and let the plane crash into the ground, but to keep fighting until they break through the clouds. They will come out stronger on the other side. ◙ 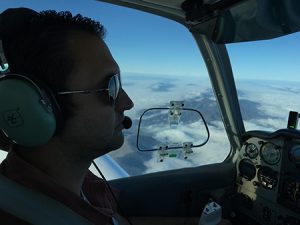 About the Author Bill Woolf

Bill Woolf is former law enforcement officer whose career was focused on addressing gang violence and human trafficking. Having a true passion for prevention, he founded a non-profit organization in 2013 called the Just Ask Prevention Project. Their efforts focused on the prevention of human trafficking and exploitation. Their principle ideology was that everyone should be prepared to respond to threats before they happen. In 2018, Bill received the Presidential Medal for Extraordinary Efforts to Combat Trafficking in Persons for his sustained dedication and achievements in combatting human trafficking by employing a victim-centered approach to transform law enforcement efforts, and equipping communities and front-line responders to more effectively address and prevent human trafficking. Bill currently serves as the Director of Human Trafficking Programs at the U.S. Department of Justice, and as an adjunct professor at both George Mason University and Mt. Aloysius College. He is an avid pilot, who has since gained a significant amount of additional training. Despite his professional achievements, he is most proud of his six amazing children who continue to amaze him every day through their perseverance and accomplishments.