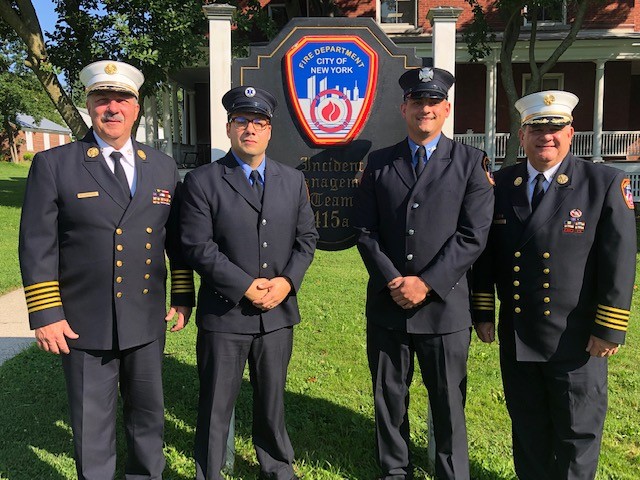 FDNY: Fathers and Sons, a Legacy Passed Along By Jim Johnson

On September 11, 2001, FDNY’s Thomas Richardson and Richard Blatus were Battalion Chiefs working in different areas of New York who had only recently gotten to know each other despite being sworn in on the same day more than 20 years earlier.

Two decades later, the FDNY’s Chief of the Department Richardson and Assistant Chief of Operations Blatus have ascended to the pinnacle of the department’s leadership and are close friends, and each have sons – Thomas John (TJ) Richardson and Michael (Mike) Blatus. These sons have recently chosen to follow their fathers’ legacy by joining the FDNY, albeit in different roles than their dads.

Both Richardson and Blatus survived 9/11, when so many of their FDNY fellows did not, largely by circumstance of duty assignment or schedule. Richardson, working at an outer borough firehouse, was off that day and did not arrive at Ground Zero until September 12. Blatus was working at FDNY headquarters just across the Brooklyn Bridge from the World Trade Center in Manhattan but took his 9-year-old daughter, Elizabeth, to a specialist to treat a minor schoolyard injury and arrived at Ground Zero shortly after the collapse of the north tower.

Blatus said his boss, Chief Peter Ganci, and many of his friends and colleagues who responded to the terrorist attacks at the Twin Towers were killed, and knows he would have likely been among them had it not been for his daughter’s injury.

In a submission for the Center for Homeland Defense and Security’s 9/11 20th anniversary commemoration publication, Blatus described the devastation at Ground Zero in the immediate aftermath of the Twin Towers collapses, including the loss of most FDNY command staff, several special operations officers, and the attempts by top fire officials to regroup and locate hundreds of missing firefighters. The final death toll of firefighters lost was 343, a staggering number leaving generations of grief for families and colleagues.

Richardson said he and Blatus were charged, along with others, to fill in for the special operations chiefs who perished, and they worked for months afterward in rescue and recovery at Ground Zero. They were also charged with stepping into the FDNY leadership void in the years after the 9/11 attacks, and Blatus said those leaders who survived 9/11 “rose to the top.”

Blatus said the responsibility of leading FDNY helped prompt him and Richardson to attend the Center for Homeland Defense and Security (CHDS) Master’s program at the Naval Postgraduate School in Monterey, CA.

Richardson (Master’s cohort 0901/0902) graduated from the program in 2010 and received the Curtis H. “Butch” Straub Award for exemplary academic achievement and leadership. His thesis “Identifying Best Practices in the Dissemination of Intelligence to First Responders in the Fire and EMS Services” was nominated for the CHDS Outstanding Thesis Award. Blatus (Master’s cohort 0701/0702) graduated from the program in 2008 and produced the thesis “Altering the Mission Statement: The Training of Firefighters as Intelligence Gatherers.” Blatus said his overarching goal as a top FDNY official is to build up the department for the next generation, so young firefighters like his son Mike and Richardson’s son TJ will always have a world-class, traditionally-laden organization, and one that is like working with family.
TJ Richardson and Mike Blatus have known each other since they were kids. They grew up together due to their fathers’ close friendship, often joining their fathers on work trips and even as kids learned to see the work as do practitioners. In many ways, their young careers also mirror each other in the sense that neither started out intending to follow in their fathers’ footsteps by working for the FDNY. Each pursued other careers initially before joining the department in their mid-20s. Ultimately, though, the gravitational pull of the family pride and passion both fathers have for their beloved FDNY convinced each of the men to join that family.
TJ Richardson, 28, joined the FDNY as an emergency medical technician (EMT) in February 2019 and currently works in Queens. He says he aspires to become a firefighter/paramedic like the 29-year-old Blatus, who joined the FDNY in 2016 and works in South Bronx.

TJ Richardson, who grew up on Long Island, actually began a career as a train conductor, and he was 25 before he told his father he wanted to be an FDNY EMT, which his father had suggested when TJ was a teenager. It took some time for TJ to realize this was the career path he wanted to take. The elder Richardson said his son told him he saw how happy his father was going to work every day with a smile. Although tired at times, the smile was the same at the end of long shifts; the pride just showed through the exhaustion.

TJ Richardson said he was motivated by the opportunity to serve the way his father has for his entire career. “There’s nothing greater than a life of service,” he said. “I wanted to serve the city I love. When the FDNY called, I came running.” TJ said he doesn’t remember much about 9/11 since he was still in elementary school at the time. He commented that his Dad talks more about that day now than before, perhaps because of the approaching anniversary, and he learns more from him each time. The comments are always related to how the FDNY brotherhood came together in a time of such enormous crisis and supported each other. His Dad always talks about the men he knew – both those who were lost and those who survived and worked on “the pile” as the collapsed WTC towers became forever known.
When TJ passes his firefighter exam, he will become a third-generation FDNY firefighter following his father and great-grandfather. His grandfather also served as a Long Island volunteer firefighter.

The elder Richardson admits he worries about the pressure on his son of following a well-known father in the department. He advised his son to just “go to work, put on your uniform, and do the best job you can,” and said he has heard from TJ’s peers that he is doing a “pretty good job.” “All we want for our children is for them to do the best they can,” the elder Richardson said. “(FDNY) is a dangerous job, a dirty job, but it’s an honorable profession.” TJ Richardson called his father his “biggest role model” and added, “If I can be half the man he is, I’ll be happy.”

The younger Blatus said he always had an interest in joining the FDNY growing up and regularly visited his dad at the firehouse, which he described as a “home away from home.” After graduating high school in 2010, Mike Blatus competed in college soccer at Concordia College in Bronxville, NY, and Dutchess Community College in Poughkeepsie, NY. He then certified as a New York State EMT in 2014. He worked for Transcare Emergency Medical Service for two years until he was selected to attend the FDNY EMS Academy in January 2016.

After graduating from the academy, Mike Blatus was assigned to Station 18 in the South Bronx. He was nominated in 2017 by his station captain for inclusion into the FDNY’s paramedic program. He graduated from the rigorous nine-month New York State Paramedic Program and was promoted to the rank of Probationary Firefighter and inducted into the department’s Probationary Firefighter School on Randall’s Island, NY, in 2018. After graduating from the school in the Top 10 of his class, Mike Blatus was assigned to Engine 92/Ladder Company 44 in the Morrisania section of the South Bronx, where he currently serves with pride.
Mike Blatus is the second generation on his father’s side to work for the FDNY, although he said he is the third or fourth generation to do so on his mother’s side. But, don’t tell Mike Blatus working for the FDNY is a “job.” He doesn’t see it that way. For him, it is an unparalleled pleasure to work for what he calls the “greatest department in the world.” “I like not having a (regular) job; I love going to work (with the FDNY),” he said.

Like the elder Richardson, the elder Blatus also expressed some concern about the effect on his son of following a well-known father into the FDNY but said he’s proud of the job Mike is doing. “How could I be more proud?” Rich Blatus asked. “It’s not just joining the department but working in medical treatment. He’s always had the knack to take care of people.” According to Mike Blatus, after he graduated from college and talked to his dad about joining the FDNY, he said he told his father, “I have some big shoes to fill.” Mike’s father said, “No, you don’t. You have your own shoes to fill.” ◙ 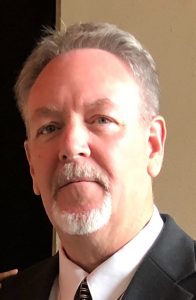 Jim Johnson works as a public affairs specialist at the Center for Homeland Defense and Security (CHDS) in Monterey, CA. He writes for and edits the Center’s publications, including the alumni magazine Watermark, as well as the CHDS website and press releases.

Johnson worked for three decades in journalism, including 15 years at The Monterey Herald, before joining CHDS in April.