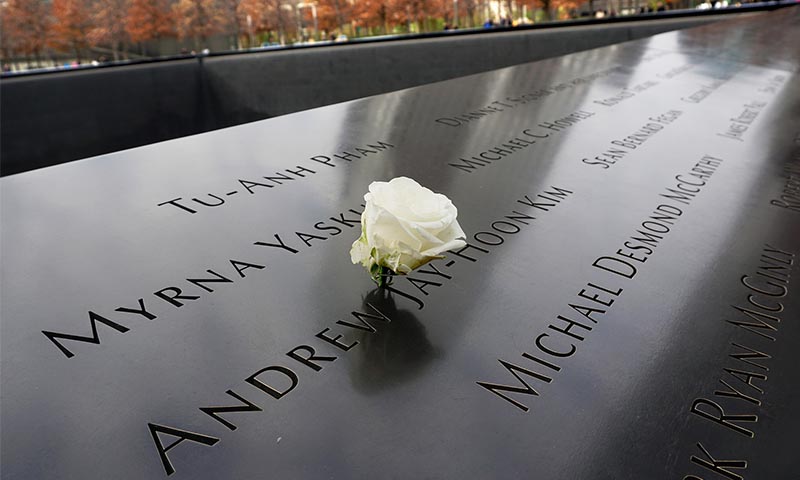 Everyone who has a birth year beginning with “19” clearly remembers where they were twenty years ago when they first heard of the terrorist attacks in New York City, Arlington, VA, and of course, the heroes who prevented a third attack over the skies of Pennsylvania. I had taken a day of leave from my job with the U.S. Marshals Service on what I thought was just a random Tuesday at the time to go buy a shirt and tie for a wedding I planned on attending that coming weekend. I turned on the TV that morning and heard Tom Brokaw’s voice on what was supposed to be “The Today Show.” Everything changed after that…much like the rest of the law enforcement and first responder communities. My colleagues and I were instructed to pack our bags for an indeterminate amount of time and report to a number of locations related to National Security. We did so without a moment of hesitation.

We remember the victims of those attacks and their families and friends. My wife lost a very close friend in the World Trade Center attacks. We remember the selfless first responders who charged into danger to rescue the injured, and of course, the courageous men and women of our intelligence and military communities who stopped at nothing to find those responsible for the attacks. We were all impacted. As we honor their sacrifice and service, it is also a time to examine what has changed and how we can best ensure the safety of our communities and, specifically, the safety of our families in the days ahead.

The War on Terror continues each and every day. Sometimes we see it on the front pages, but more often, it is fought behind the scenes, both domestically and abroad. The challenges, though, have never been more significant. Our local neighborhoods have become global neighborhoods, and communication has never been easier or faster. Security systems have become solution-oriented and more efficient while running on enterprise-wide networks. Transportation hubs and ports use biometrics to identify travelers and those transiting our borders.
However, this same innovation has also provided anonymity to bad actors through end-to-end encryption. Devices and networks are routinely compromised, exploitation on all fronts is a systemic issue, and counter-biometric technology is used to mask identities. The good news is, as a former law enforcement official, I know from up-close and personal experience that our folks are up to meet each and every challenge. However, I also wanted to share some inspiring news from the perspective of my most important role, the dad of three elementary school-age children.

I don’t think we have ever seen such an advanced use and reliance on technology by our children as we do today. During the pandemic, kids have been asked to quickly adapt to new ways and to virtually connect with their teachers, friends, and family members. Devices are being introduced to kids at a younger age out of necessity, which means our conversations with them about the associated risks need to keep pace. The same devices and networks that terrorists use to plan attacks and compromise systems, the same devices our military and the law enforcement community uses to catch those terrorist and criminal actors, are also the same devices and networks our children use. While technology is at the forefront of our thoughts, we also cannot forget about the physical threats related to school violence as our kids filter back into schools across the country. “See something, say something” is not just for combatting terrorism; it is a good philosophy for all threats that may harm our communities and our families. Having open conversations with your kids about their overall safety is not just good parenting. It’s absolutely imperative to their well-being.

As a parent, I know the days get crazy, filled with requirements and “must do’s”. It is essential to set aside some specific time during the week between school, sports, and outside activities to have these chats. You must have their full attention when explaining that the world is filled with mostly good people, but because there are bad people and we do not always know who they are, we have to be cautious when interacting with anyone we don’t know. Online gaming and social media platforms popular with teens are specifically challenging issues. So it is critically important, in a casual way, to ask your kids who they’ve played with or spoken with during the day. Showing that interest will make the discussion more conversational in tone, all while reinforcing your values and throttling their access to the internet through parental controls on their devices.

This type of communication and monitoring can be a part-time job by itself, but one that will pay you back more than any full-time job you have ever had. Kids have become so internet savvy, especially over the past 12 months, and it is surprising how much they’ve absorbed. To reach them, our messages must be clear and uncomplicated. They must understand and apply the rules we set for them in an environment they are only beginning to grasp regardless of whether they’re at home, at school, alone, or with friends.

The number one way we can keep them safe and away from harm only takes about 30 seconds per day. It’s a parent’s secret weapon. Tell them these two things each and every day despite how the day may have gone. First, tell them you love them more than anything in the world, and second, tell them how unbelievably proud you are of them no matter what they do. It may sound cliché, but if your kids know deep down they are truly loved, and their self-esteem is heightened because of actions and words their parents use, they are less susceptible to being lured down the wrong path by others. Additionally, if your children know and feel those two things, they are much more likely to tell you when something is wrong, when they see or hear something inappropriate, or when they think they may have done something wrong themselves. Saying those two things to our kids is our most powerful weapon in the fight to keep them safe, more powerful than anything you can buy, turn on or build.

Twenty years ago, we experienced a terrorist attack on our native soil, the likes of which we never thought we would see. Lots of innocent people lost their lives on that day because of those horrendous attacks, while others gave their lives in the days, months, and years after to ensure we would never experience that type of tragedy again. As we honor them by remembering their service and sacrifice, we need to continue their work to keep our communities and families safe. Keep the dialogue going with your kids, even on the craziest of days, and when you are beyond tired from work and the shuffling to and from all their activities. Know the people they encounter each day and how they are interacting with those around them. Most importantly, keep ensuring they know who to turn to when they have an issue, problem, or even a simple question, as that is our best weapon to ensure their safety. ◙ Derrick Driscoll is Principal, Strategic Alliances for Peraton’s Civil & Health sector, where he leads the sector’s federal government strategy and engagement. Driscoll is a highly accomplished former member of the federal government’s Senior Executive Service (SES) with 27 years of law enforcement experience and leadership at the U.S. Department of Justice (DOJ).
Prior to joining Peraton in 2021, Driscoll served as the Deputy Director of the United States Marshals Service (USMS), with oversight of 4,000 Deputy U.S. Marshals, 1,500 administrative staff, and a 5,500-person contract security workforce. The USMS occupies a uniquely central position in the federal justice system and is responsible for ensuring the rule of law, federal judicial security, fugitive apprehension, witness and prisoner security, and asset forfeiture. As Deputy Director, Driscoll also was the agency’s Chief Operating Officer and Chief Risk Officer.
Joining the Marshals Service in 1997, Driscoll served as a member of the Hazardous Response Unit (a rescue/response unit formed after the tragic events of 9/11) and the Strategic National Stockpile Security Operations Program. He managed the Agency’s Joint Terrorism Task Force Program while also serving on the National Joint Terrorism Task Force and receiving five Director’s Awards.
Driscoll received a graduate fellowship from the University of New Haven, earning his Master of Science degree in Criminal Justice with a concentration in Security Management.